Can you help Bristol Mind raise funds to support Mind's Trans+ helpline? The service currently runs two nights a week with the hope of raising £10,000 to expanding the service to three days a week. Every penny counts, as little as £1 can help provide support to people in need.

Mindline Trans+ is a joint service delivered by Mind in Bristol and Mind in Somerset.

and a transgender mental health study showed that 88% of transgender people had experienced depression and 84% had thought of ending their life. Because of these risk factors, we operate a specific LGBTQ+ counselling service in Bristol and a UK wide transgender helpline MindLine Trans+. 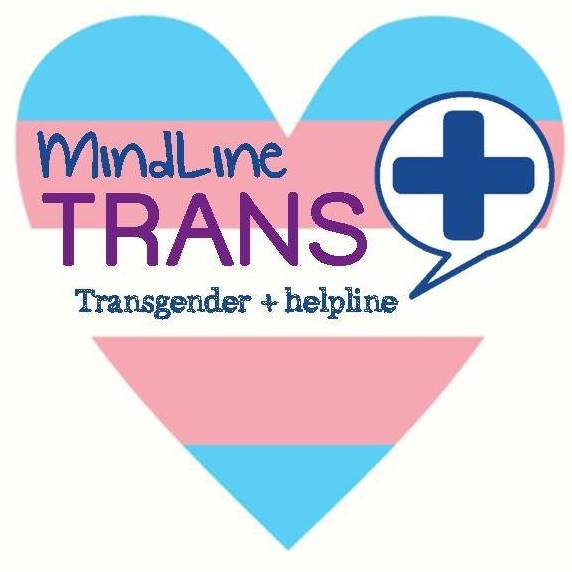 Anonymous caller: 'You've had similar experiences, I knew you were going to understand'

Volunteers at MindLine Trans+ first picked up the receivers on the 10th of February 2017 and continued to do so 2 nights a week in conjunction with Somerset Mind. Bristol Mind has a lot of experience in running helplines, the general MindLine has been a source of support to people for 24 years offering people in distress a safe place to turn. The reality of the problems facing one particular group of callers compelled us to create a specific helpline for the transgender community.

Liz Sorapure (center right below), projects Coordinator for our MindLine explained “we started the set-up process in September 2016, after National Mind held a LGBTQ+ and Mental Health Conference in Bristol earlier in the year. Concerns were raised of the lack of trans specific mental health services. Consultation with the trans specific community highlighted the need to recruit Trans+ volunteers who our callers would feel comfortable talking to because they may recognize many of the situations and empathize with the challenges to a person’s mental and emotional health. Our ethos at MindLine is that having a non-judgmental and accepting space to talk in is key to promote good mental health and emotional wellbeing”. 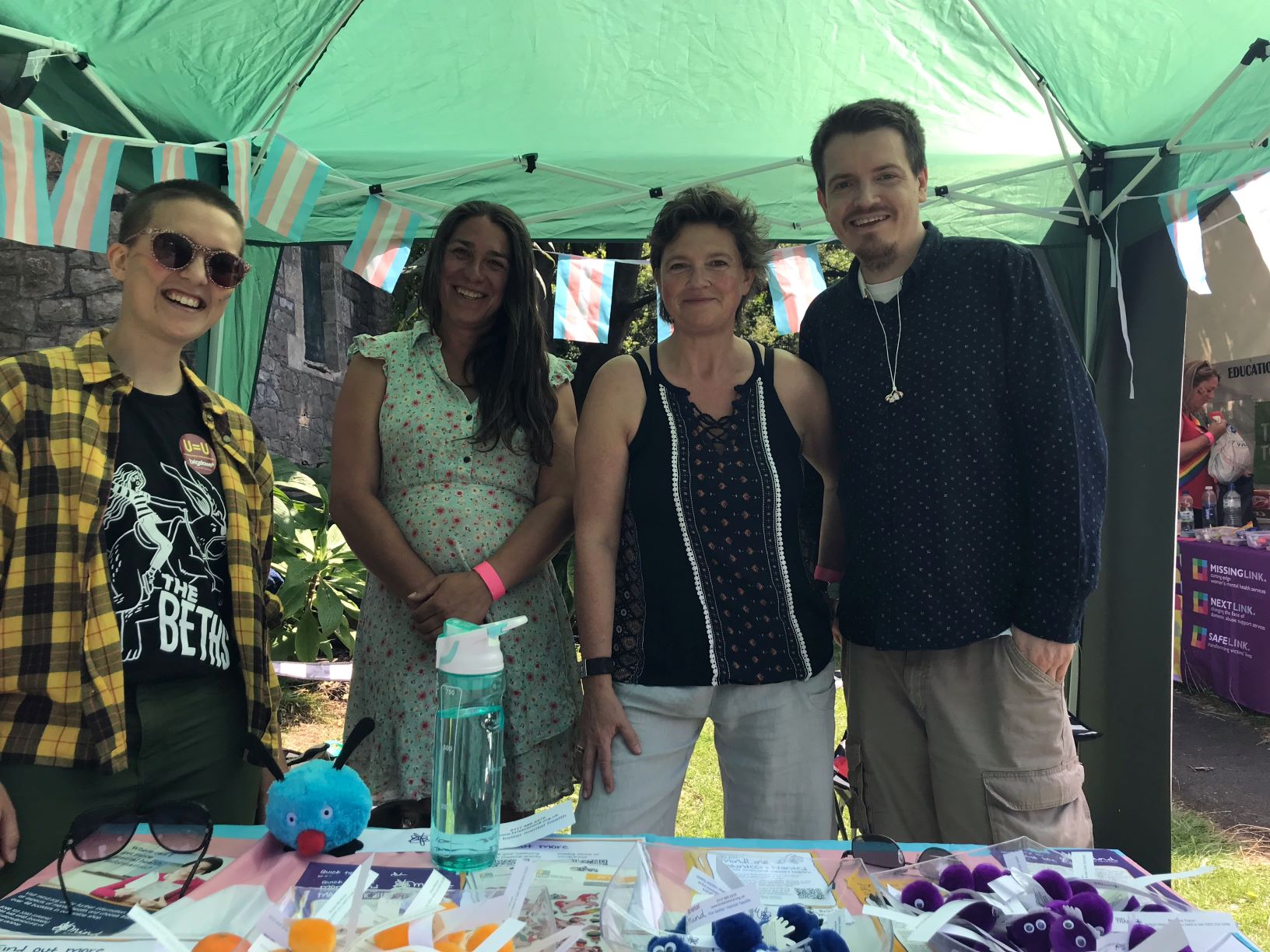 “One advantage we did have in the process was that while about 1% of population in the UK identifies as trans, luckily Bristol has a large Trans+ population so we are able to recruit volunteers. The ongoing challenge is to make sure people, especially in rural communities across the UK who may be isolated, know that we are here to support them too”.

Since the line has been open two themes have recurrently come up for callers talking about their mental health experiences, those are depression and isolation being prevalent. However it is important to recognize that not all trans people have poor mental health. 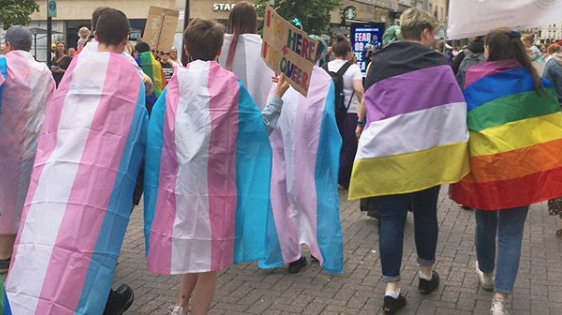 MindLine Trans + is a national helpline, people can call us from anywhere in the UK. This service is operated on a self-referral, anonymous basis, we do not record or take details and all the volunteers remain anonymous.

Speaking to one of our volunteer listeners, a transwoman herself, revealed many of the reasons the trans helpline is needed 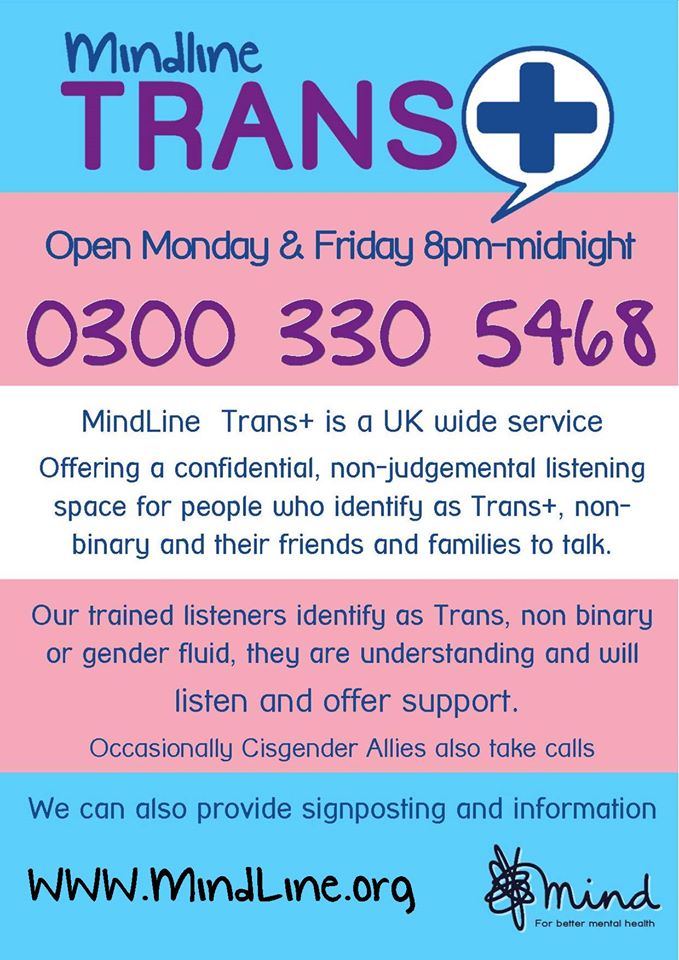 “The inability of mainstream mental and physical health services to assist due to a lack of time, resources, and the need to assess patients can make them a ‘un-Trans-friendly’ place to turn.  Because we are an independent and anonymous, people at the beginning of their journeys feel able to discuss their identity without the fear of being assessed against criteria. We provide space and time to talk about their feelings. I have largely been taking the calls of those that have already transitioned and need mental health support. Some people face prejudice from colleagues. Some become cut off from their family, spouses or partners, and, in particular, children. It’s not uncommon to hear people say their parents won’t accept them because ‘we had a son and we don’t want a daughter".

The MindLine Trans+ provides a safe place for people to talk about feelings confidentially. Our listeners will try understand the multitude of feelings and concerns that may be going on. Our callers are there to listen and offer support.

MindLine Trans+ is a confidential emotional, mental health support helpline for people who identify as transgender and non-binary, but it also supports family members and friends and provides signposting to other services and resources.